Big Idea: God is the builder of the church.

1. How is Paul feeling as he writes this?

I think Paul is frustrated. He spent 18 months with this group of believers, and they seem to be much less mature than other groups that he only spent a short time with.

2. What is Paul’s expectation?

Paul’s continual expectation revealed in all his letters is that believers would grow up. Just as a baby grows into a child and then into an adult, Paul expects this for these believers. He illustrates this by comparing the teaching they can receive with milk. It takes very little effort to swallow milk and a mother’s milk is enough for early growth. Mother’s milk alone will not result in the growth and strength that we expect a baby to experience, so we celebrate when a child is able to begin eating solid food that requires chewing.

3. What is the indication that Paul’s expectation is not being met?

The primary indicator of immaturity and lack of growth is the presence of jealousy and quarreling. Rather than living out the love of God by loving one another, these believers are fighting with each other. Rather than developing true maturity they are trying to make themselves superior by putting down their brothers and sisters in Christ. Anyone coming to one of their gatherings would quickly notice the discord and lack of unity.

1. What is it natural for us to do as human beings?

One of our core desires as human beings is for significance. If we cannot achieve our own 15 minutes of fame, then we want to associate ourselves with someone who is famous. Fans of sports teams want their team to win, because somehow that makes them feel more significant as the fan of the winning team. Unfortunately, the search for significance leads us to follow people and ideas that are temporary and flawed.

I think the seed is the gospel. The gospel is the good news that we can have an eternal and personal relationship with God because of the death and resurrection of Jesus.

3. Why does Paul compare our spiritual growth to a plant?

We understand much more about how and why a plant grows today than Paul’s readers did in the first century. The whole process of putting something that appears dead, the seed, in the ground and then having it grow into something alive and productive was a mystery. I think Paul uses the plant analogy because everyone understands that plants are expected to grow. There are things we can do to help a plant grow, but how each of those things result in growth would have been unknown to Paul’s readers.

4. What is essential for spiritual growth?

1. Why does Paul switch metaphors from farming to building?

Paul’s initial focus was on growth and he wanted to emphasize the essential role that God plays in our growth as believers. We can ensure that our seeds are planted where they will get plenty of sun. We do not control the process of photosynthesis; God does because He created it. Paul wants to talk now about work that we perform in relation to God and the church. For that he uses a metaphor based on physical processes that are well understood.

2. Why are foundations so important?

We thought we needed more room in our house, so we decided to add on to it. The first step in the building process was to expand the foundation. It looked like the contractor had done a wonderful job, but when my brother checked he found that the foundation was not level. There was a ¼” difference between the outside edge of the foundation and the point where it joined the existing foundation. That error resulted in challenges in the building process that ultimately resulted in gutters that never drained properly.

3. What is the foundation of the church?

4. What does this mean for individual members of the church?

Our goal both collectively and individually should be to look as much like Jesus as is possible. We are standing on a strong, stable, and clear foundation. The security that this provides should enable us to more easily conform to the shape of the foundation as we firmly attach ourselves to it.

1. What is Paul communicating through his list of building materials?

I wonder if the story of the three little pigs originated from Paul’s words here. Paul lists a variety of materials from very valuable to almost worthless. When we serve God, we are building on the foundation. How we choose to serve varies. Thoughtless service has little immediate impact and is quickly blown away. When we are deeply invested in our service and serving for the glory of God there is the possibility of greater impact and something built that will last.

2. What can survive a physical fire?

As we discovered in the 2017 fires in Sonoma County almost nothing survives a raging fire. Things that we thought were permanent, like glass, simply evaporated. Even the concrete foundations that appeared to survive were damaged and had to be torn out and replaced. There was one thing that survived and that was bricks. When we looked out over the burned-out neighborhood, the brick chimneys stood tall and alone. The bricks survived because they were created by passing clay through fire. 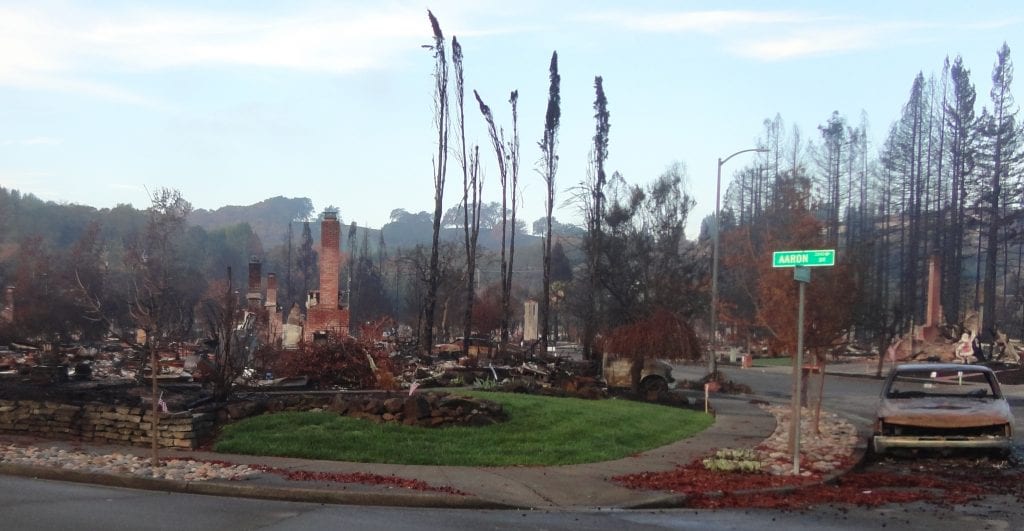 3. What survives the fire of judgement?

Paul is not explicit. I think the things that will survive are the things built in partnership with God for His glory. Jesus tells us in the Sermon on the Mount that things given to people in need will survive. Investing in relationships with people that result in spiritual growth is building that will last.

I used to think that when Paul talked about our bodies as temples of the Holy Spirit, he was talking about each of us as individuals. I still think the Holy Spirit indwells believers and that should not be taken lightly. However, in this passage Paul is emphasizing the important role that the local congregation plays as a temple of the Holy Spirit. All the pronouns that are translated “you” in verses 16 and 17 are plural.

I’ve tried clarifying the translation to emphasize this point.

5. What is the function of this temple?

The purpose of the temple is to provide a dwelling place for the Spirit of God. When a congregation fulfils this function, a person walking into a gathering of these believers will be walking into the presence of God. When we participate in a gathering of believers the most important thing is the presence of God. It is pleasant to visit with our friends, but our primary purpose is to worship God and hear from Him.

6. What is Paul’s final warning?

The believers in Corinth were divided. Paul considered this division damaging to the temple and he wants the Corinthians to know that God will destroy the people who are the source of the division. This is a constant theme through the New Testament letters. Division is not to be tolerated. Unfortunately, we don’t seem to have gotten the message and we continue to divide making it difficult for the unbelieving world to see the body of Christ.

1. What is required to become wise?

To become wise, we must pursue the wisdom of God. We know from looking at the teaching of Jesus that almost always Jesus’ way is not the world’s way. Most of the time Jesus turns the wisdom of the world upside down. The best example related to what Paul is trying to teach the Corinthians is found in Mark 10:42-44. James and John have come to Jesus seeking positions of power and honor in Christ’s kingdom. Jesus uses this request to teach all the disciples a lesson about greatness in God’s kingdom. In God’s kingdom those who are greatest are those who regard themselves as slaves to everyone else. Jesus takes the world’s understanding of power and authority and turns it upside down.

2. What trap had the Corinthians fallen into?

In organizing themselves they chose to bring the power structures of the world into their gatherings. They sought out the smartest people they could find and chose to follow them. The result was disunity and competition. They forgot that their example and leader was Jesus.

3. How does Paul reassure the Corinthians, and us?

We have everything we need in Jesus. We don’t need to be the smartest people in the room if we have Jesus. It isn’t that we shouldn’t continue to learn and grow, but the pursuit of knowledge for the sake of knowledge is not productive. We know we’re pursuing the wrong thing when we begin to feel superior and pursue division rather than unity.

Grandpa's Reflections Blog Update Email ListPlease subscribe to get an email every time there is a new post.

Check out Grandma's newest book on Amazon.  It's a sweet story about a little girl, mud, and worms.