It was an amazingly quiet day given that all the grandkids were home from school. It had been a long tiring week and they all slept in until a little after 8A. That is past their television turn on time, so all the kids gathered in the living room and we watched two episodes of MacGyver. I don’t know how long this fascination with MacGyver will last, but it is something we all enjoy watching together. Once MacGyver was over, we had waffles for breakfast and settled into our books for the morning.

I realized as we prepared for lunch that I really didn’t feel like I was in China. I was with family and everyone was doing the same things they would have been doing if we were back in their home in Colorado. Everyone speaks English so communication is easy. The reality of China doesn’t really hit you until you walk out the door. My daughter-in-law noted that even then it is too easy to remain in a bubble by pursuing relationships only with other expats. This is the default and it takes great intentionality to pursue relationships with the larger community of Chinese.

Beijing is a huge city and everywhere you look you see high rise apartment buildings. I’m grateful the building in our complex have peaked roofs. This makes them easier to spot on the skyline which might be necessary should we get lost in the very large park that is right next to the complex. Our walk in the park was beautiful and we didn’t begin to explore all that is there. It was very apparent that it is winter as all the trees were bare and all the plants dormant. Signs on the ground reminded us that there would be flowers in spring. I hope we’re here long enough to see the park bloom.

Most of the men in the park were gathered at the basketball courts. There were probably a dozen half court games going on. Our exercise was limited to walking except for a brief time on a swinging apparatus. I quickly picked up how to swing my legs in opposite directions as if I was walking. I found it much more difficult to make both legs go the same direction at once. 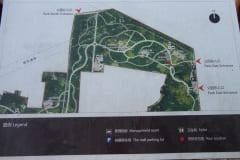 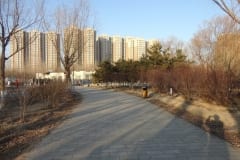 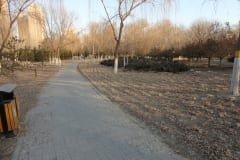 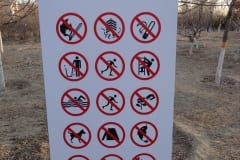 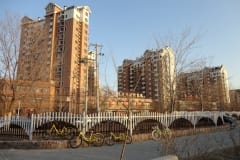 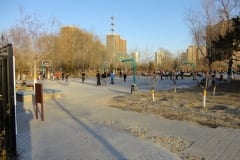