The last time we visited China our grandchildren were much younger. One of the regular parts of their daily routine was spending some time sharing their Yeah Ducks and Yuck Ducks before saying their prayers and going to bed. Yesterday was definitely a Yeah Duck and Yuck Duck day.

We spent most of the morning attempting to get our phone and computers working to support our lives in China. We had some successes, but often ran into things that just didn’t work the way we expected them to. We made a little progress but were frustrated by the failures that we still need to work around. This was my Yuck Duck for the day.

The first Yeah Duck of the day was realizing how well our grandchildren have adapted to life in China. Our oldest grandson takes the subway to and from school on his own every school day. He is one of three non-Chinese kids in his school and seems comfortable with that. The other kids take the bus every day to their school. They have a very regular schedule in the morning, and it was fun to watch them get themselves together and get out the door with only minimal encouragement from dad.

The second Yeah Duck was family pizza night. There is a Papa John’s in the big mall closest to the apartment. Friday nights are half-price nights, so we bundled up and walked together to the mall. It was light enough on the way to take the shortcut up and over the railroad tracks. The pizza parlor is on the fourth floor so there were many flights of escalators on the way up. We ordered our pizzas and then went to the window into the kitchen to watch them being made. We had forgotten to take pictures of our first restaurant meal in China. This time I brought my camera along and took several pictures. A man in the restaurant saw me taking pictures of our whole group and came over to offer to take one that included all of us.

The best part of pizza night was the opportunity to have one on one interactions with several of the grandkids. It is clear that they each have things that they want to do with us while we’re here. My final Yeah Duck is that it hasn’t been as cold as I expected. I have yet to feel the need to put on my stocking cap and gloves when going outside.

Here are some additional pictures from our first several days here. 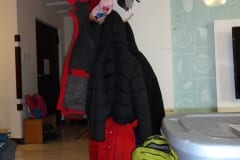 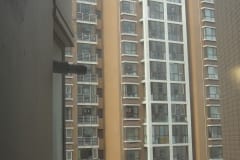 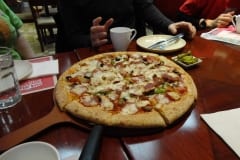 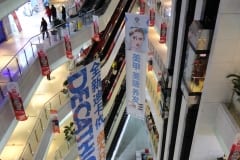 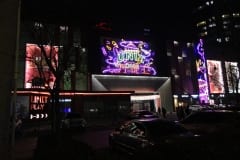