Well, the heater flame is coming on, but we still have some adjustments to make to be comfortable taking a shower. The repair experience was very interesting from many perspectives.

The first thing was that the repairman showed up exactly on time. He said he would be there at 2P and there was a knock on the door at 2P. I’ve never had that happen before. In the U.S. we’re fortunate if the repair person arrives during the 4-hour window that they quote. This repairman works for the apartment complex. After I opened the door, he quickly put on shoe protectors and went to work.

Since I speak no Chinese, we had recruited one of the expats here in the complex who speaks excellent Chinese to come and translate. It turned out that he knew the repairman and had interacted with him before on a repair at his apartment. They started talking and had a non-stop conversation until the repair was complete and the repairman had left. I don’t know why, but it just felt weird to have this person from my home country talking rapidly and non-stop with a Chinese person. Clearly, it is possible to learn the language if you spend enough time at it.

The repair itself was quite interesting. The repairman brought no tools with him. We had removed the covers from the heater already, but I have no idea how he would have removed them if it hadn’t been done already. We turned the hot water on, and the repairman proceeded to bang on the heater. It was obvious that the flame was not igniting. Now that I’ve been reminded of what normal is, I realize that there was no clicking that is usually associate with an electronic ignition in a gas appliance.

Eventually, the repairman noticed that the exhaust fan was not turning. He stuck a ballpoint pen into the fan and got it to turn. The igniter fired and the flame lit, and a big puff of black smoke came out the exhaust pipe. The explanation was that during the recent heavy winds the fan had been jammed in some way. As soon as it was unstuck everything began to work as expected.

The heater definitely heats water, but how much is dependent on the temperature of the water coming in and the flow of the water through the heater. The flow through the shower head exceeds the capacity of the heater to get the water really hot. When I washed dishes, I slowed down the flow and the water got too hot to put my hands in. We’ll keep experimenting and I’m sure we’ll figure it out. This is just one more example of how life here requires constant adjustment and experimentation. 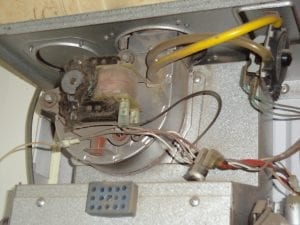 Grandpa's Reflections Blog Update Email ListPlease subscribe to get an email every time there is a new post.