One one thousand, two one thousand, three one thousand…twenty one thousand. I lose count of how many times I count through this sequence every day. The best defense against the Covid-19 is to wash your hands with soap for at least 20 seconds: when entering a residence, after using the toilet, after touching and animal, and before eating. Many of us are used to washing our hands frequently during the day, but the desire to avoid catching the virus has increased everyone’s awareness here in China. Children struggle with this the most. They know what they are supposed to do, but it is amazing how short a time they claim is twenty seconds.

When this whole virus episode began, and our movements were restricted we did have some concern about catching the virus. As time has gone by and the numbers of new cases in Beijing continue to go down, we feel very safe where we are. Reading the newspaper from back home has us feeling that the best way to avoid the virus is to stay right where we are.

Washing hands is a consistent recommendation everywhere. Opinions on wearing masks vary widely depending on where you are. Where we are in China, we cannot leave our apartment complex without having a mask on. Yesterday was a beautiful day and we decided to go for a long walk to a new park. Almost everyone was wearing a mask. As we entered the new park a small boy took his mask off and tossed it on the path. He was simply doing what all the rest of us wanted to do.

We have been regularly walking through the two parks that are close by. The main path through the first path leads into the second park. There are places in the park for playing badminton, basketball, and other physical activities. Mass plantings of trees, shrubs, and bulbs are everywhere. We are looking forward to seeing everything in full bloom. The green shoots from the bulbs were just beginning to poke up when we took yesterday’s walk.

The third park at the end of the second park is much larger than the first two parks combined. As we approached yesterday, we could see that the parking lots were full and there were people everywhere. People are obviously getting tired of being cooped in their apartments during this voluntary quarantine. We did get our temperatures checked entering the park. The first thing I noticed was a broad and straight asphalt path stretching far off into the distance. It is hard to describe the plantings of trees, shrubs, and other perennials. Large sections of grass were everywhere. Patches of grass large enough to run and play on don’t exist in the first two parks. We know the park is large because we were exhausted by the time, we made a partial loop around it. The grandchildren were riding bikes and seemed to have no concept of the distance we had gone.

We were tired at the end of the walk, but very grateful we had gotten a chance to see the new park. We were also grateful that the restrooms in the new park have Western toilets to use. We haven’t seen so many people in weeks. It was wonderful to see families out enjoying a beautiful day. Various kinds of ball and kites were everywhere, as were several different kinds of scooters. Roller blading was a popular activity and a skill challenge due to the number of people on the path. I couldn’t imagine such a beautiful place in this huge city and I’m very glad we had an afternoon to explore it. We’ll have to go back once everything is in bloom. 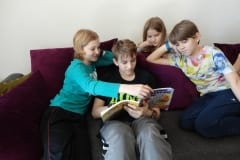 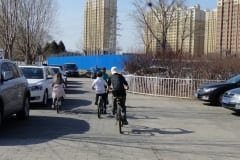 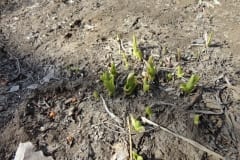 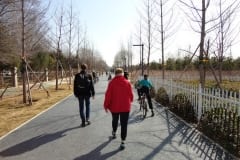 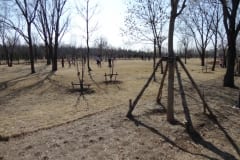