Friday night is pizza night here in Beijing for our family. Pizza is “buy one get one” free at Papa John’s, but only if you pick it up in the restaurant. We hadn’t been out in a while so we decided we would walk to the shopping center where the restaurant is located. The last time we took this walk it seemed like we had the street to ourselves. That wasn’t true last evening. There were many cars on the streets and that made the walk through the tunnel of death a little more adventurous. The constant was the motorcycles flying by.

Restaurants are beginning to open, but almost no one goes to them. Instead, an app on your phone will take your order and soon the food will show up at the gate to your apartment complex. The reason people stay home is that recommended practice is to have no more than two people at a table. In fact, the restaurant staff would not serve us unless we spread out. For us, that meant four tables, but that was no problem as we were the only ones in the restaurant. While we were eating my oldest grandson was counting the number of delivery people who were taking out orders from the restaurant across the mall. He counted fifteen in about a half hour. When we went to leave, we had to stand to one side of the escalator as the delivery people were running up and down. For them time is money. The tools of their trade are a smartphone and motorcycle.

They aren’t always moving. In between orders the delivery people sit chatting near their motorcycles. The shopping center is a big center of activity since people can get deliveries from many restaurants and the largest grocery store in the area. We were almost home when we saw a group of motorcycles and delivery people waiting near a building right next to our apartment complex. Our daughter-in-law noted that the doorway we saw led to a grocery warehouse. This is very common. This grocery store has no walk-in traffic. Everything it sells gets delivered by motorcycle. Most people live in these apartment complexes, so the delivery people don’t have to travel far to make their deliveries. I wonder how this might work if we enter a quarantine when we get home.

In the pictures I’ve included some pictures of our apartment. The most challenging thing to get used to is the bathroom. There’s no tub or shower stall. Instead, the whole floor slants toward a drain in the corner and water can go everywhere. The other challenge you can’t see. Hot water is provided by an on-demand hot water heater. It gets the water plenty hot, but there is a long delay between when the demand for hot water occurs and the hot water arrives. Until then the water is very cold. We fill a bucket with the cold water and use it to flush the toilet to avoid wasting water.

The only meal we cook is breakfast, since we have all our other meals with our kids in their apartment. At the end of the kitchen on the counter you can see two pitchers. The solid white pitcher has an electric heating element in it. The water here needs to boiled to be safe to drink and this pitcher accomplishes that. Once the water is boiled and cooled a Brita filter pitcher removes the particles from the water and improves the taste. The process for making sure we have enough cool drinkable water has become routine.

Space is at a premium and that apartment owners have chosen to install a combination washer/dryer. This took us a while to figure out. Before we figured it out we had one day where the unit went back and forth between wash and dry several times. I think the clothes were in the machine tumbling back and forth all day while we were gone. They were clean but the buttons on several of my shirts were casualties. Some were only partially broken off and others had disappeared. 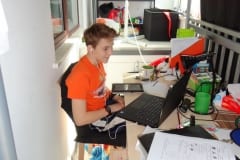 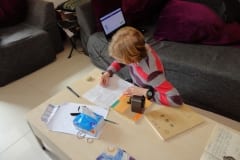 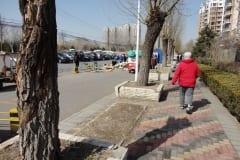 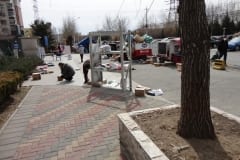 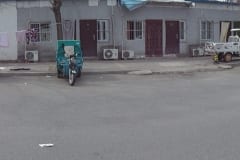 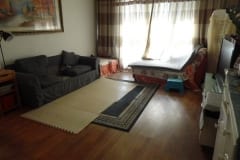 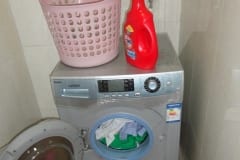 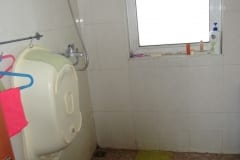 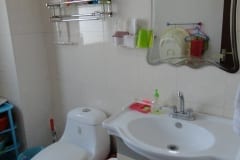 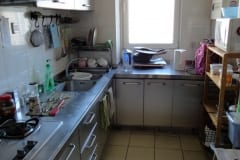