How do you celebrate a birthday with COVID-19 restrictions in place?  What does a birthday party look like for foreign kids in China?  We were fortunate to find out.  One of our grandsons turned twelve last Sunday.  The party was on Saturday and did require some extra planning.

The first thing was identifying a location.  Our grandson wanted to spend three hours playing “Capture the Flag”, so some open space for running was needed.  Our son wanted to be sure that this space was off the beaten path, so a gathering of twenty kids wouldn’t draw unwanted attention.  The park where we take our regular walks provided several locations and the one off in the corner of the park was chosen.  There was room to run and there didn’t seem to be many people who walked in this area.

Our grandson loves to cook, and the first part of the celebration was making a special chocolate cake with his dad.  This was no ordinary cake.  When they poured the batter into the cake pans, I thought there was no way it would come out as cake, but it did.  The major challenge in making the cake was finding powdered sugar for the frosting.  Powdered sugar is a professional cooking item that is not stocked in the local grocery store.  I’m not sure of all the details, but I heard something about a delivery person on a scooter crossing Beijing to bring us powdered sugar.  It was worth it to get the frosting just right.

The next challenge was getting all the refreshment supplies out of the apartment complex and into the park.  With a combination of backpacks, personal grocery carts, and assorted bags we were able to get everything to the park.  We left the complex at different times to avoid drawing attention to ourselves with the gate guards as we left.

It was a beautiful day with a nice breeze to keep the air clean and plenty of sun to keep all of us warm.  Once all the kids were gathered our son explained the rules of the game and the general boundaries.  The next process was the choosing of teams.  This seems to be a regular part of children’s games and I always hated it when I was a child.  With rare exception I was the last child chosen.  It may have been a little easier in this case as the selections went mostly from oldest to youngest.  The basic idea of the game is that each team has a flag that is hidden and to win the other team must get the flag and return it to their territory without being tagged.  In the end, each team won one game.  For the kids, the big objective was to run as much as possible.  Everyone has been cooped up in an apartment for over two months and there was a surplus of energy to run off.

A couple of hours into the games we served the cake and ice cream.  We also had chocolate brownies for anyone who didn’t want cake, but most chose cake and it quickly disappeared.  We are very grateful that our grandchildren have peers to interact with daily.  We would love it if they had more Chinese friends and hope that this will come over time.

We had been a little concerned that a large gathering of children might cause some concern.  There were some people who walked through the area as the kids were playing and one even took some pictures.  However, no one ever came to ask us to disperse.  The large crowd of people playing basketball was another indication that we were all being allowed a day to enjoy people and the outdoors.  It was a very good day. 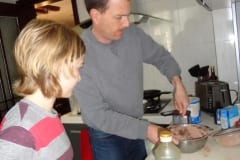 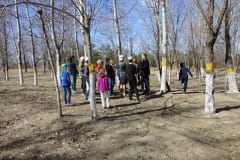 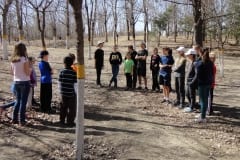 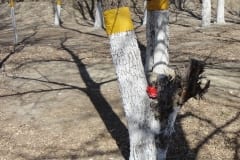 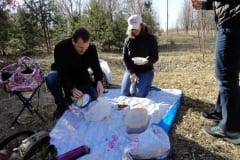 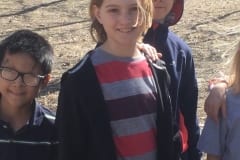 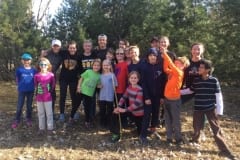